Moderator
The recent firings of coaches at Georgia Tech, Arizona State, Wisconsin, and Colorado State have led to a surge in transfer portal requests, including one linebacker from Georgia Tech who is taking an official visit during the LSU game.

Moderator
The addition of former FSU commit OL Roderick Kearney brings Florida back to the #8 (270.92) in 2023 recruiting rankings after a brief stint at #10 (266.45 points). CB Cormani McClain is expected to commit to Florida soon, which would keep Florida at #8 (279.93) right behind LSU (283.37). The next big story to track is the package deal between EDGE Qua Russaw (hypothetical 287.07 with Cormani McClain) and his Carver teammate LB James Smith (294.18 with Russaw and McClain). A hypothetical addition of McClain, Russaw, and Smith would put the Gators at #3 right behind Georgia. A backup plan to the package deal of Russaw and Smith out of Carver would be to get EDGE Keon Keeley (288.14 with McClain), which would put Florida at #4 behind Notre Dame.

The chart below shows the recruits who have offers from Florida for the class of 2023 or 2024. Note that Florida still has not been able to grab a 5-star athlete (98 rating or higher). The highest rated recruit Napier has grabbed so far is Kelby Collins of Gardendale, AL. If Napier can get McClain, that would be a great win due to him being the highest rated recruit with OVs to Florida. 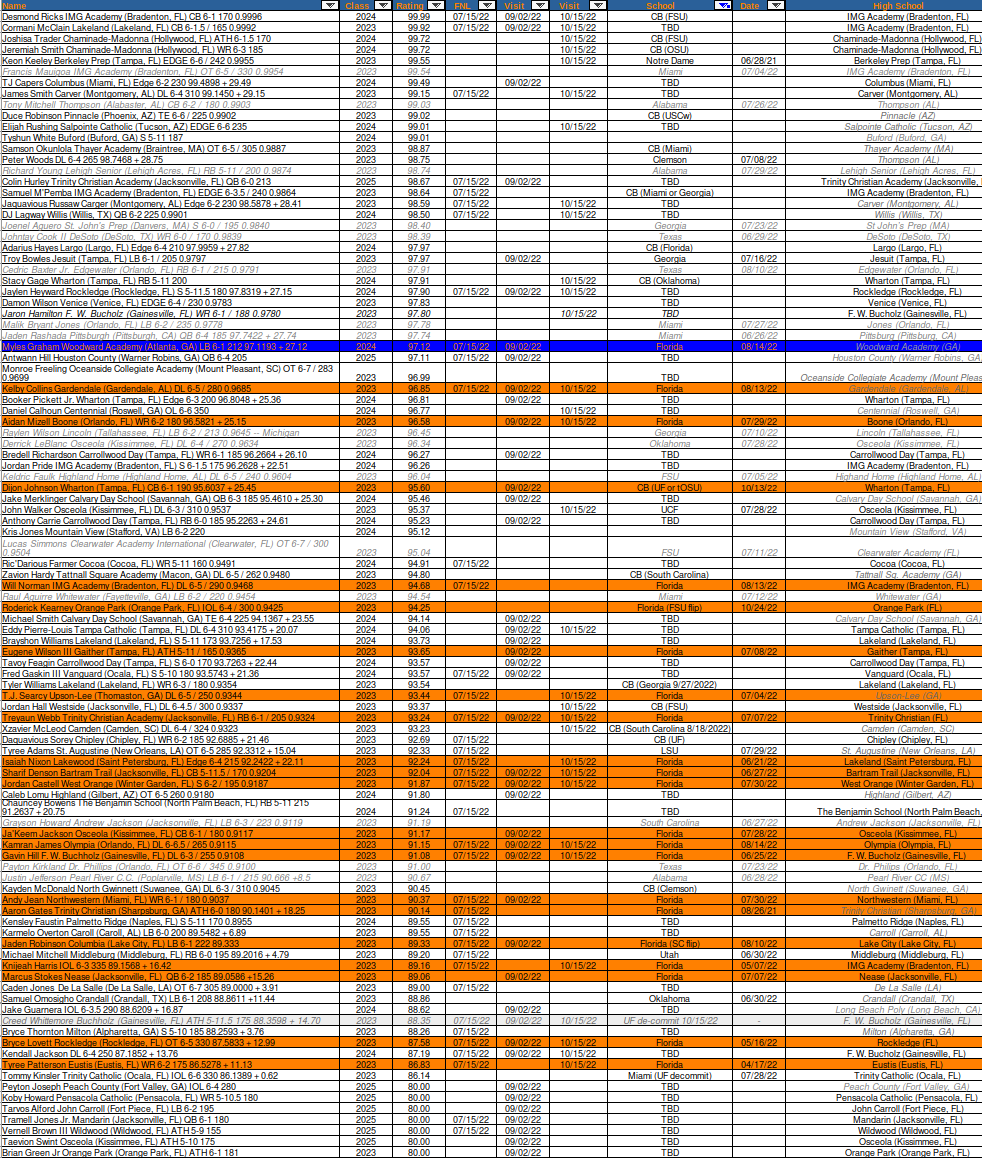 The trending graph shows that other than Alabama, no Florida rival has enjoyed consistent success with recruiting. Georgia's recruiting machine is taking off under Kirby Smart. Florida's recruiting is trending in the right direction. If the rumors are true, Florida may be back in the top 5 in recruiting for next year with a chance at some repeat success in 2024. 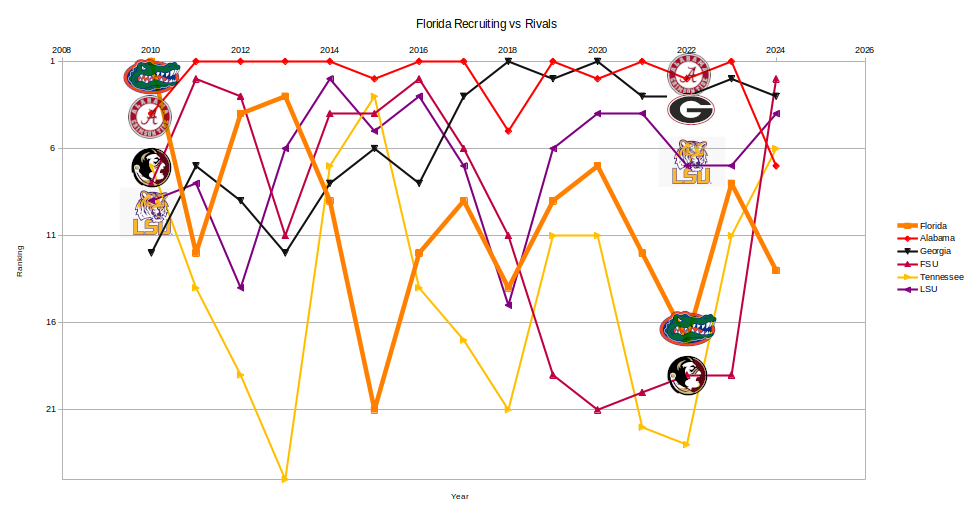 Staff member
Super Moderator
The "big day" finally arrives, and after all the hype about this McClain kid about to be a "sure commit", turns out we lose ANOTHER 5-Star--and lose him to MIAMI, again, of all programs--as we did a month or so back with the top-rated Florida prep-QB.
I don't know what this weird "tease-and-shaft-job" we keep running up against is about, but I am already SICK TO DEATH of it!
I don't wanna hear another tale about some pending 5-star who is "all but in the bag".
Let the little pukes GO to "Paid Vacation U".
My basic rule is and always will be, if you are "Miami-material", WE DON'T WANT YA!!!
I mean it. The difference between them and us--hell, the diff between Coral Gables and GAINESVILLE--is so great as to make the whole argument absurd.
A whole TEAM-full of such individuals pretty well DEFINES "a disaster in the making", far as I can see.
"You are considering going there? OK--We withdraw our offer..."
Period. I DO NOT care to hear this story again.

Staff member
Super Moderator
@Escambia94,
In case you haven't heard yet (you surely will, but I get such a charge being able to pass this one along!), but at 11:30pm on a Thursday night it comes through as a big headline on several national and State-of-Florida (and GATOR) sites:
2023 top-ranked California QB J Rashada just jumped his Miami commitment--flipped it BACK to University of Florida Gators!
The details are still emerging, but it is pretty juicy, apparently involving a heartfelt "RETHINK"/apology-laden "mea culpa", where Napier allowed a relaxed, informal continued "dialogue" between Jaden and a couple of staff members who had developed a relationship with him and mainly just LISTENED as he pretty quickly soured on what he found as he became more familiar with the U's program...
There are now rumors flying about there being MORE such potential moves in the offing--though so far people I have talked to say Billy had gotten to know Rashada somewhat, had him specifically targeted as the best-fitting prospect for his plans at QB in the 2023 class, and that this all developed in a uniquely "organic fashion"...But that he wasn't likely to be so "flexible and understanding in EVERY such case"--to which I THINK that whole Cormani McClain fiasco was being referenced in particular there. A young guy's "mistake" is one thing; a full on, blatant PAYOFF is something else, at least to a fellow like Billy Napier, who places so much emphasis on "Character" and TEAM building.
Anyway, we'll no doubt know more over the next day or two.

A WHOLE lotta RELIEF coming out surrounding Jaden Rashada and his "second chance at the school I REALLY wanted and planned on going to all along..."
Look: These are KIDS--they make mistakes, get caught up in all the attention and hype and temptation...Like I said elsewhere, there are differences, some subtle, some HUGE, between a last minute "impulsive last moment change-of-heart" this one begins to regret almost immediately, and/or that one who begins playing fast'n'loose with lies and schemes and angles "under the table" all along--then thinks he can have endless "do-overs"...which, somewhat sadly I think, the current "system" ("NON-system", really, in terms of how little is yet truly written DOWN or "ironed out" in all of this stuff--NIL, the transfer portal and the like--so far) HASN'T gotten settled or codified thus far.
So...Jaden Rashada, for all the public nature of his "FORMER-committment" to Miami a little over a month ago, had NOT burned his bridges behind himself vis-a-vis actually "signing with ANYONE"-- Miami, UF or ANYONE ELSE...and with FLORIDA Coaches (above all HEAD Coach Billy Napier) ready and willing still to welcome him, he was able to do this; others may or may NOT be so welcomed, their change-of-heart so quickly, easily CELEBRATED!

Staff member
Super Moderator
(Also, I wonder how this hits the Stokes kid we signed as a "Plan B"...HE'S been an enthusiastic and loyal commit who has encouraged others to join the Gator's 2023 class.)

Moderator
An unfortunate side effect of recruiting 5-star and high 4-star athletes is pushing out 4-star athletes. If Stokes is good enough he can beat out Rashada just as 3-star Stetson Bennett has beaten half a dozen 5-star QBs. This is the new normal.

Escambia94 said:
An unfortunate side effect of recruiting 5-star and high 4-star athletes is pushing out 4-star athletes. If Stokes is good enough he can beat out Rashada just as 3-star Stetson Bennett has beaten half a dozen 5-star QBs. This is the new normal.
Click to expand...

Agreed...I just hope he stays and competes. Both kids are gonna be on the sidelines tomorrow, both taking visits and (supposedly) hyping uncommitteds on the joys and advantages of themselves joining them (and US) in Gainesville...We'll have a full complement of both committed future Gators AND prospects of various stripe here for this one. 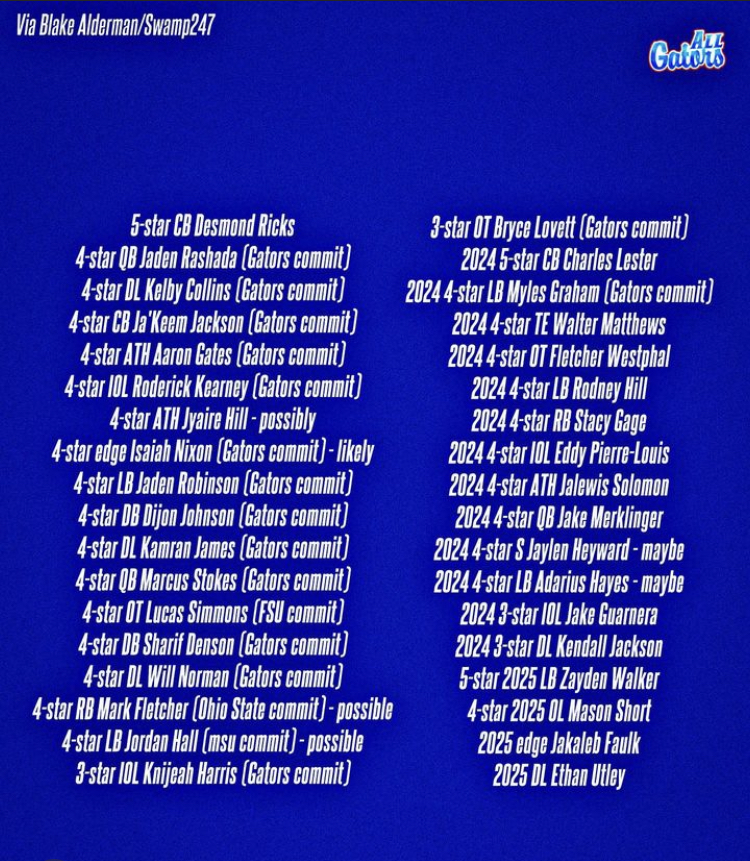 Staff member
Super Moderator
What do y'all make of Marcus Stokes' screw-up, and UF's subsequent withdrawal of his scholarship offer?
I am a confirmed "anti-racist", supporting, to whatever degree it is more and more POSSIBLE in the current world we live in, for there to be an open, color-blind acceptance of ALL young people into our midst (especially as members of the collegiate population). I prefer and SUPPORT the idea that not just the administration, but ALL GATORS should reject racism, casual, subtle, overt or inadvertent as it may be.
However, the more I learn about THIS one the more confused and "mixed" is my reaction.
The kid was singing along to lyrics of a song on the RADIO. Now, in this day and age, and (by his own subsequent admission), young Stokes, as a high-profile recruit needed better judgment than to be caught in such a scene on-camera/microphone blurring out the n-word, regardless of context.
I have NEVER been comfortable with it being thrown around so casually, even by African Americans--but have long understood that regardless of how I feel about it as a white "baby-boomer" who was raised in a vocal civil-rights parenting household, it is acceptable AMONG BLACK FOLK--NOT the rest of us.
As an SEC school we are a Southern institution among many others, in Southern States with a certain unavoidable history pre-, during and post-Civil War. There is baggage, crosses that must be borne, lessons still to be learned and the continuing need to be CAREFUL, to "go gently".
But does this kid really deserve the "termination of his dream road" for what more and more appears ill-inforned cultural IGNORANCE MUCH more than overt, hostile racism?
I don't know. And, by-tye-way, I'm also not entirely sure if the reaction would have been as kneejerk quick and dramatically final had not our original "FIRST CHOICE" not recently flipped BACK to us...
I HOPE that is just an unfortunate "coincidence of timing", and that even the THOUGHT is unworthy of me to mention here--but there it is.
I mean, he says all the right things in contrition after-the-fact; perhaps intervention, an opportunity for discussion and more open education might have been pursued--time and dialogue ensuing...
The thing about all this, the times and the world we are living in is that I know that I might be castigated for not jumping unquestioningly on one bandwagon or the other among those out there muttering about this to each other.
But this is a subject that, if anything, deserves, BEGS FOR an extended examination and airing of real thought and emotion...Instead, however, another chance at exactly that is being missed--in my view being buried under "tsking" and head-shaking self-righteousness.
I'm not saying we were WRING to revoke his scholarship...but I sure would prefer the opportunity for dialogue, communication, education and some sort of logically redemptive closure be at least pursued first.
This just seems more like the "safer PC road".

Moderator
In today's era my opinion on the Marcus Stokes situation is "no comment".

Escambia94 said:
In today's era my opinion on the Marcus Stokes situation is "no comment".
Click to expand...

OK...Then I'LL carry on and proceed to answer my OWN thoughts with another potential counter-point to my wondering if our just flipping Rashada might have possibly made Stokes' dismissal "easier":
Is it just possible that an originally confused and disappointed Marcus Stokes (who, in a Twitter comment the day after news of Rashada's flip, by his own admission prefaced his immediate politically correct "welcoming the competition" by noting his "just having passed a disturbed and upsetting day" after hearing the sudden NEWS of this change, in truth was maybe NOT all that upset at his now suddenly having NO CHOICE but to now take his recruitment, along with his skills and efforts to ascend to "QB-1" at a major program, ELSEWHERE after all?
Again, admittedly another cynically unworthy thought on MY part as to a graceful "way out", a smoother alternative to direct and immediate head-to-head competition with a high profile cross-state rival player.
I hope not...but regardless, I wish all involved well. Perhaps there will be further comment and eventual closure of some kind here.
(By the way, my first hearing about this whole thing came on a YouTube Hurricanes site I inadvertently clicked on somehow included among the "Florida Gators" sites set aside for me, wherein the host, a big Hurricanes fan, laughed and GLOATED as he brought this news...Real class.)