Staff member
Super Moderator
...At the very least, the time may well be coming that, with the above outcome in fact coming-to-pass in what will then be the last game of the season, will it THEN also be time to consider:
“FIRE DAN MULLEN, for cause”?
(Or does he get the “one more year” to turn it back around again no matter WHAT?)
Like I say, this is looking more and more like a longer and longer “REBUILD” (OR a longer and longer, more and more painfully “SLOW DEATH”??!).

Staff member
Super Moderator
In fact, AGAIN: I’M for offering SS the AD job!
What was at least somewhat tongue-in-cheek has, with another week and another bad loss, become a potentially more reasonable suggestion!
Or do you STILL award me the “jumping/humping the shark”-Award for STAYING with it?
(I’ll give you this: It’s a mark of our bewildered confusion at this point that none of us are sure how serious the idea is in the first place!).

Moderator
Here are the top defensive coordinators as ranked by a couple other sites. Grantham's ranking varies between #5 and #25. I rank him around #6 or so

Staff member
Super Moderator
I’m currently thinking “New BLOOD!”—across-the-board, in answer to EVERY such question and/or consideration being raised.
It may be just “knee jerk” neophilia (“an obsessive attachment to anything new”, simply BECAUSE it IS “NEW”!) on my part...I am so fed up with this “hard left and straight DOWN” that we have so suddenly plunged into, and the extended period of unrealistic self-assessment and concomitant self-DENIAL it now seems we must have been stuck in for some time in order to ultimately find ourselves IN it in the first place, that facing hard realizations appears an inescapable “first step” that must be taken to begin ANY journey back “UP”!
I don’t KNOW “the way back”:
Only that we better do SOMETHING, START that “journey”, and FAST!

Moderator
I am adding the following to the list of DC candidates:

Escambia94 said:
I am adding the following to the list of DC candidates:

From your own “candidates”-list, whom do YOU “like” , @Escambia94, ?
Could you see some COMBINATION emerging from out of that “list”? From what you know of them all, do ANY of them already THEMSELVES have interconnections that might “naturally”, mutually align themselves from AMONG themselves? (I’m of course looking, SEARCHING AMONG these individuals in vein hope that a natural “consensus” might emerge from among them ON ITS OWN!).
At this point, it begins to feel as if only some sort of “MAGIC” might save us now, know what I mean?

TLDR: Dan Mullen will need to trust an up-and-comer to translate success at smaller schools to a big, high pressure job like Florida and hire Staggs, Belk, or Reeves, or he will have to pay out the nose to get a DC to make a lateral move.

TLDR: Dan Mullen will need to trust an up-and-comer to translate success at smaller schools to a big, high pressure job like Florida and hire Staggs, Belk, or Reeves, or he will have to pay out the nose to get a DC to make a lateral move.

Awesome work, E—.
Any insights into which way he gets to go? And maybe your OWN intuitive ideas as to who best suite us—perhaps a few of the best fro EACH group?
Of course, the whole process COULD be rendered moot by another loss—and/or further mounting forces!
I dunno: I just get the feeling that the way things are going, dreaded “further developments” will somehow inevitably arise to force fate’s hand. It has certainly driven events so far of late!
Is there no one of vision and daring who will answer the call?
Someone, some WAY we are so far missing entirely?
It is a tall order—but an enormous opportunity as well.
No matter what, there is no “playing it safe” THIS time. Which begs the question:
Do we even have (in Strickland and the “braintrust” of money and influence) the power structure of those with the brains, power, insight and/or wide-ranging connections from which there is any chance someone of sufficient talent and charisma might emerge?
“Come the moment, comes the MAN.”
I wish I had more confidence in the process AND the choices!

Moderator
Nobody knows what Dan Mullen is thinking. Also it is not as easy as calling up any of these coaches and waving a salary at them. Some have goals and preferences that do not include moving their families to the state of Florida. There is more to hiring coaches than playing it safe or gambling. Heck, based on the table below I would ask Geoff Collins to take a demotion and a pay cut to be a defensive coordinator, but that is not realistic. I would imagine that Florida can match any of the salaries that are not green in column 5.

Here is the entire list. I had to take a screen shot because the forum limits the size of embedded text and tables. 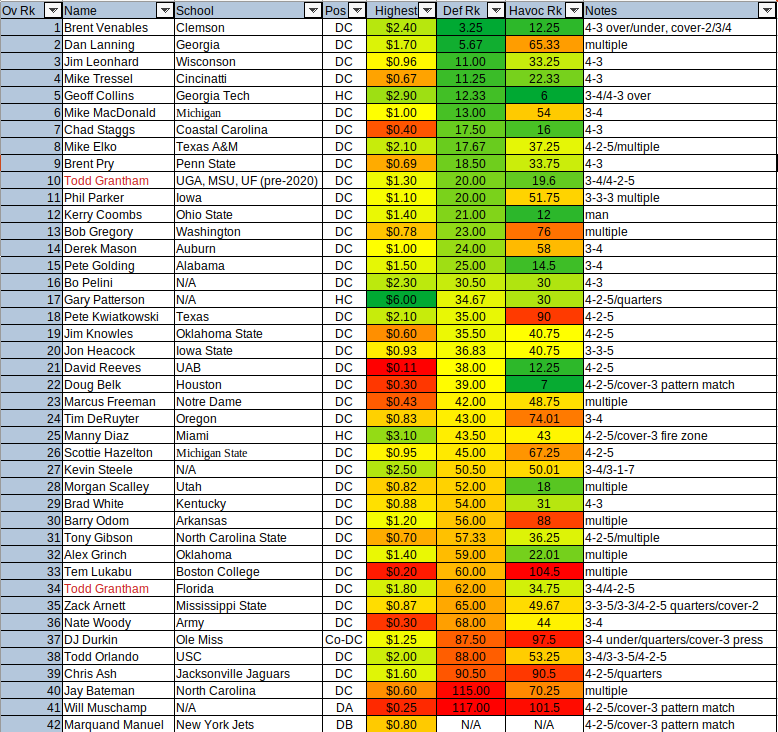 Would DJ Durkin come back to the Gators?

Leakfan12 said:
Would DJ Durkin come back to the Gators?
Click to expand...

Gotta be a “step up”. Don’t know anything about how “doable” it is.
Based on today’s showing on that side of the ball—better do SOMETHING, for now.
Fast, if we want those extra weeks of practice—and media attention, for recruiting’s sake.
(Aside: More than ever, it sure LOOKS like Mullen was “given the word, “Fire the DC, etc, or ELSE...” And the resulting “lay down” by the D in the first half was perhaps considered a predictable “immediate reaction” that won’t in itself then trigger in his bosses’ the same response clearly favored by the fans on hand in the Swamp! But it isn’t as if I have so much more confidence in STRICKLIN & Co.’s guidance than I do in the mob’s!
It gives them plenty of cover if they are leaning that way themselves by now already, though.
Oh, I dunno WHAT to think anymore! This whole string of bad luck, bad decisions and maladjustments has just destroyed my basic sense of hope, balance and confidence built up over time.
Where is ANY sign of a “Gator Way”, a traditional “Gator Mindset”. As symbols who might help to rally us “from the sidelines”, we’ve got Tebow, and Spurrier, of course.
Am I missing someone, ANYONE? Tebow is “a media figure” now, but little more I’m afraid, when it comes to playing any real part in our resurgence.
Spurrier could be more—but he’s getting up there, if he’s even INTERESTED in that kind of involvement anymore.
Maybe y’all know of important, talented and influential, so far lower-profile figures that might step up and into that role.
Maybe from the NFL? Gators who might come back?
Me—so far, I got NUTHIN’!

Staff member
Super Moderator
Short of a loss, let’s face it:
Today’s play was about as bad as we could have feared.

Leakfan12 said:
Would DJ Durkin come back to the Gators?
Click to expand...

He might consider it. I will do some research and come up with a ranking.

I would love Marquand Manuel, but he has no real experience. If we can somehow fenagle Venerables from Clemson that would be interesting, but he would probably only leave for a HC job.

Agreed on both points. Manuel is my bottom-rated choice for a DC based on the statistics above largely stemming from lack of experience as a head coach. My top-rated choices for DC are all entrenched at other schools and may not be looking for lateral moves. The top DCs with orange and red for "top salary" are the most viable targets willing to take a promotion.

Fresh, original thinking, Dale.
I sense we desperately need BOTH now. (The “thinking” AND in this case, probably the men themselves!)
L

I think he would a DB coach first before being the DC.

Leakfan12 said:
I think he would a DB coach first before being the DC.
Click to expand...