You would THINK that with that kind of running game, today's defensive performance, and all these turnovers we would have THIS one well in hand now--but somehow, no.
We need to (finally) log a short-field drive (this one is from just their side of midfield) for a TD just to make things LOOK "acceptable"--on the scoreboard, anyway.
Again, there is STILL a "rebuild" ahead fir Billy and his Staff. Next year will probably be a but rough early on too.
AR takes a sack.
Yikes, we just cannot get out of our own way.

Escambia94 said:
For the second time in the game, USC coach Shane Beamer is clueless on the rules of American football. Both shitty plays he ran might have been legal in Canadian football or perhaps arena football, but not in big boy football. What a clown.
Click to expand...

He DID learn "special teams play" from Daddy, though!

Staff member
Super Moderator
Again: Damn shame--our D basically pitched a shutout out here...It has been special teams and PASSING GAME (AR, since the end ofvtge 1st quarter, when we essentially WON this game, it is turning out.). Let's just score here and put this one fully away. 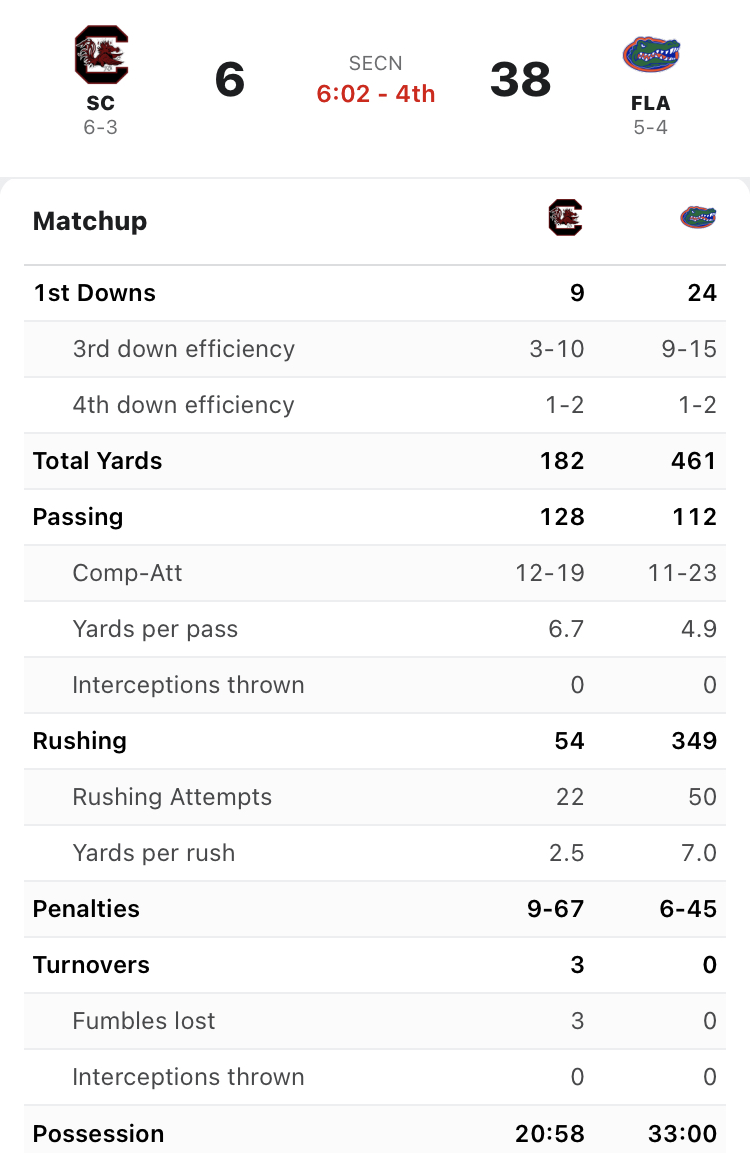 Moderator
Spencer Rattler is a shitty quarterback and I love watching him struggle.

Moderator
This shows just how bad the backups are.

…and with a fumble. 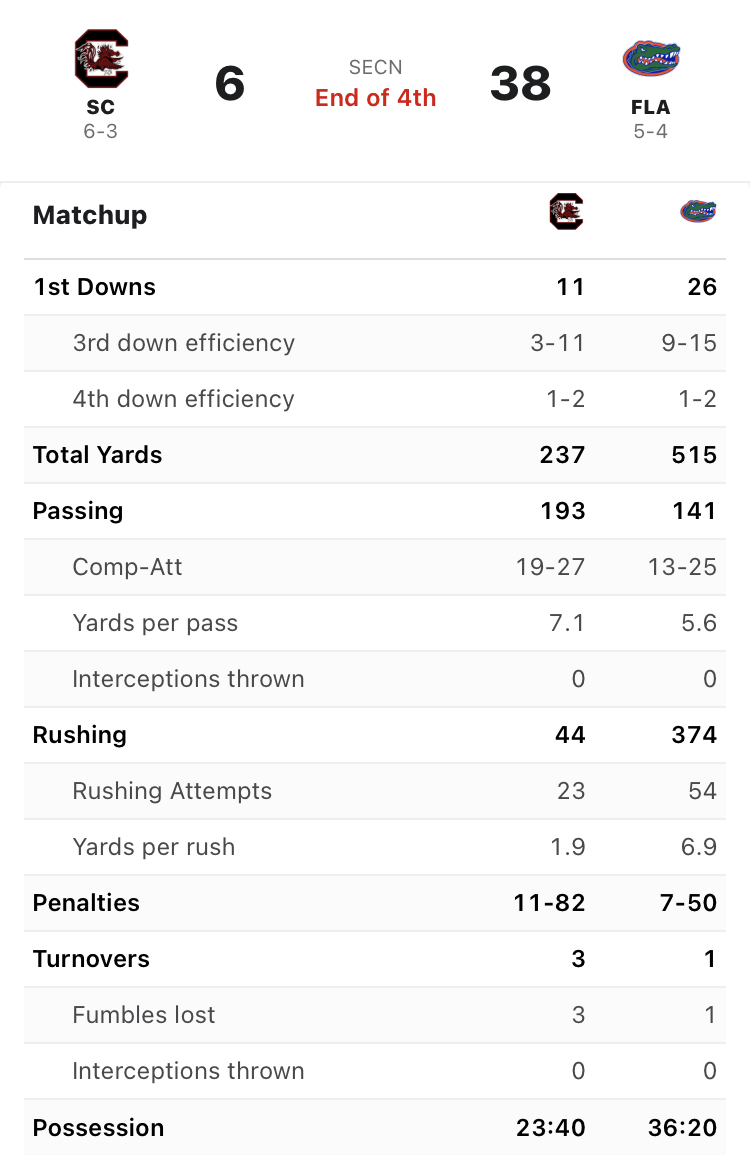 Moderator
Today’s attendance was over 89,000 and this season average was the highest since 2015. 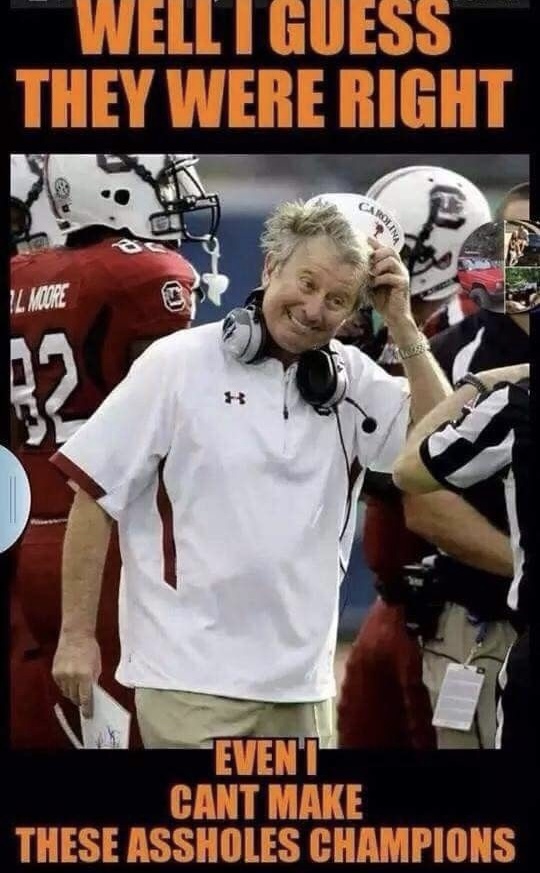 Staff member
Super Moderator
Alright--We "SHOULDA HUNG HALF A HUNNERT ON 'EM!" (a la SS), shut 'em out, etc.,--but we aren't gonna let it get away either.
Kitna coming in now.
OK: Anthony played a whale of a 1st quarter. If he could show us just ONE WHOLE GAME like that, I would gladly shut up. But he CONTINUES his inconsistencies in play. The TRUTH is that "inconsistency" is what defines him so far.
And here's a Gator fumble.
ANOTHER loss of possession in the Gamecock end of the field, after a nice drive.
I don't know why Napier kept changing to lower and lower backups at QB...Kitna needed the work and was looking good. Then another one, first time, comes in and loses the ball.
Doesn't really matter--if anything, we are less able to hide the truth of our uneven play today. Puts more pressure on our otherwise deservedly proud defense, though.
End of game. 374 yds on the ground. Shut out pitched by the defense--but our special teams looked pretty damn shaky...multiple missed fgs, gave up TD on fake punt, and so on.
I know I sound like an ungrateful, entitled Gator fan, so I want to say this:
I love this program, bleed orange and blue.
I have already fallen in with the new Coach and staff--he and they are just "our Gator Braintrust" to me at this point now, and I am behind them all the way. I am an Anthony Richardson fan--but I wish he'd commit HIMSELF to GROWING, to being a better QB and GATOR. I believe he should declare himself to come back for one more year; I also think he should do it NOW...but one way or the other, if not for his own sake then for the sake of this team and PROGRAM he should make that choice publicly SOON. I HOPE that the only reason he has NOT is because he HIMSELF hasn't decided--NOT to play games, whatever may be behind them. If he's coming back, next season can be "special"--for him and US...but if not, we need to know and plan accordingly.
In other words, I am ready to lay our gamble down, "put it all on the line" with AR and see if "the future is NOW" NEXT season after all...
But it's a whole different deal with AR moving on to the pros. Not NECESSARILY a whole lot worse--just a different gamble--more of an unknown one.
I have gone hard on Anthony at times during games; That's a result of the wild swings in his performance. THAT. MUST. CHANGE.
Simple as that. If/WHEN it does, WHOMEVER he plays with will benefit--the FANS will be in for a treat. Until then, well, he will have to ignore/get USED to that kind of uneven support paralleling uneven PLAY.

Escambia94 said:
This shows just how bad the backups are.
Click to expand...

Staff member
Super Moderator
Sigh...
If you'd have told me "We will drill USC (east) "38-6" I would have smiled snd said, "We'll TAKE it!"
...So how come I have that shitty "post-shaky-Gator-WIN" feeling??! And this after a near-perfect 1st quarter out of the gate, great defensive play throughout, multiple crucial timely turnovers, and all, and I STILL feel that way at the end?
WTF is WRONG with me??!
But it's true.
I wanna relax, feel good about it...a number of things HAVE "continued to improve".
All true--but too MANY still have NOT.
And no matter WHAT everyone has been saying, AR's problems with consistency is one of those...
One of MANY, but a glaring and very IMPORTANT one. Again: I'm sorry--but it is one of the things that we'll all have to continue to scrutinize over these last coupla games on the road to end the regular season.
We are still on track towards "8-and-4"--it'll be tough, and if we get there we will have somehow managed to exceed the ALREADY somewhat reduced-expectations our early-to-mid-season performances established for us...
Maybe the problem is with ME:
I should be able to ENJOY a WIN like today's.
I did NOT--probably because I am looking for all the things we need to see in order to GET BETTER.
We aren't just "living in the NOW"...WE are counting on the plan and the CLIMB TO THE TOP once more.
You see? So yes, it looks like we got the right guy for Head Coach, making the right moves:
WE LIVE AND BREATH EVERY STEP OF THE WAY...And we die a little bit with each apparent MISstep...
I just want to feel like we are making progress, PROGRESS that is building and will continue to do so into and through NEXT year.
Anything that calls that into question raises flags, puts our future in jeopardy.

As I recall and understand it in retrospect, the very fact that Holtz promised that SS WASN'T EXPECTED TO MAKE CHAMPIONS OUT OF THEM, only to raise their level-of-play to more exciting ("Fun'n'Gun"-like) levels that might closer FILL their stadium was a major selling-point after his experience at UF--where SEC Championships and an occasional Natty weren't ENOUGH for spoiled locals when it didn't happen every year.
As time went on we all MISSED EACH OTHER back "Home" in G-ville, learned lessons of patience and maturity on BOTH sides, and frustration with the reality expressed above more and more ate at him; eventually (from BOTH parties' P.O.V.) it was time for his welcome return. By now it is long since a "fait accomplit"; differences set aside and forgotten--now in many ways a part of "The Inner Circle" once more.

Staff member
Super Moderator
Me, I just want to make sure y'all are able to separate, as I do, the various complaints and criticisms that seem inescapable sometimes in the play of certain folks and the apparent philosophy underlying it, on the one hand, and my overarching support of, and loyalty TO, the players snd Coaches who may be responsible.
Like all of them, I just want to see us get better, excel TOGETHER ASAP. On those few occasions when I am tired of a particular problem, I will SAY so...and even then, I will tend to accept and trust this COACHING STAFF'S moves to correct it.
Please apply this explanation accordingly as necessary to some of the things that came up today.