Moderator
Here is my leader board for head coach at the University of Florida football program in 2022:

Luke Fickell and Billy Napier are the only head coaches on the list with a better winning record than Dan Mullen. Fickell is not leaving Cincinnati, since his family is there, his son is coming to the school, and he does not appear to have any reason to leave the state of Ohio--at least not until his kids leave home. Napier is likely holding out for the LSU position and he has no reason to leave the state of Louisiana. Mark Stoops seems happy at Kentucky, and I am not convinced he would move to Florida. I have no information that indicates Lane Kiffin would come to Florida, but I have a feeling he would for the right price. Jeff Hafley and Jamey Chadwell are up-and-comers to consider. Jeff Lebby and Joe Brady are common names brought up that I do not recommend for first-time head coaches at Florida, but if we had to give someone a shot it would have to be one of these two.

If Mullen gets fired this month then I would prepare to offer Mel Tucker or James Franklin $8M or more, then work my way down the list to Lane Kiffin and Mark Stoops at $7M or more. If those two do not pan out, then offer Jeff Hafley and Jamey Chadwell $4M. If that fails then offer Jeff Lebby and Joe Brady $3M.

Just for comparison, here is a comparison of the last few Florida Gator head coaches:

It is obvious that Dan Mullen is competitive as a head coach at Florida. Before he hit the losing skid a year ago his winning percentage was right there at 80%, like Spurrier and Meyer. Mullen would have to lose the next 2 games and go 6-6 next year in order to drop to a 64.52% at Florida.
Last edited: Nov 14, 2021

Staff member
Super Moderator
No, I gotta admit that no matter how you slice or dice the above list, analytically or emotionally, none of the alternatives to Dan Mullen really measure up.
Ultimately, I personally cannot say on any level that I get an intuitively positive feel that
any ONE of those guys is likely to take us to “new heights”.
Bottom line:
We have GOT to be able to do better than that.
Our “next successful Gator Coach”, a guy who can year in, year out be expected to have our team challenging for National Championships, has yet to appear on the horizon.
For the time being, we must bide our time it seems...Hope that a rejuvenated staff and team can recapture some of the hope, talent and momentum that seemed to have been building here not so long ago.
I’m afraid that Mullen is NOT the long term answer after all—but perhaps with Pasqualone’s help and guidance he can keep us from falling much further, can manage enough of a resurgence that we are not a wreck by the time the stars change and a true answer presents itself.
I’m afraid that’s what it has come to now.

Moderator
Here is a complete list of the top 40 head coaches. Again, Dan Mullen compares quite favorably to all NCAA coaches, and especially well against current SEC coaches who earned most of their wins and losses in the SEC. 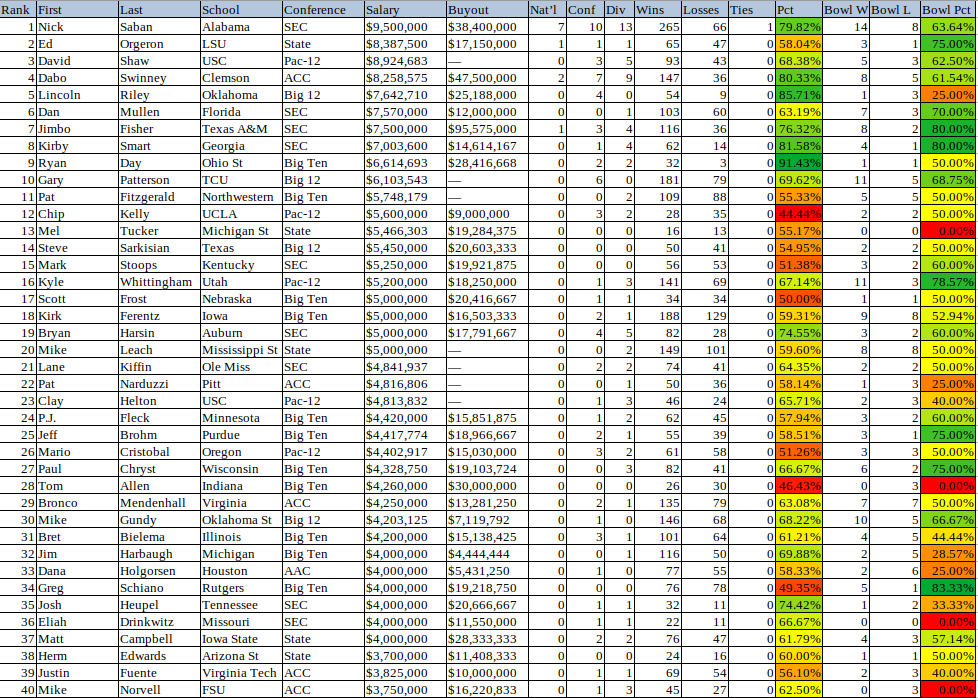 Just counting SEC wins, Dan Mullen is #2 in number of wins and #4 in SEC wins. Comparing the chart above to the one below it is apparent that Nick Saban is the only coach whose winning percentage increased going from another conference to the SEC. All of the others experienced more losses coming to the SEC. Dan Mullen's entire head coaching career has been in the SEC, and his winning percentage did increase (not shown in the chart) moving from Mississippi State to Florida.

Moderator
Just to the information is out there, Dan Mullen's W-L percentage at Florida currently sits at 71.43%. Even if the Gators lose the next two games and split the 2022 season 6-6 his W-L percentage would be 65.08%, which is higher than Jim McElwain's 64.71%; higher than every other SEC coach's winning percentage other than Saban, Smart, and Fisher; and #15 in the nation. 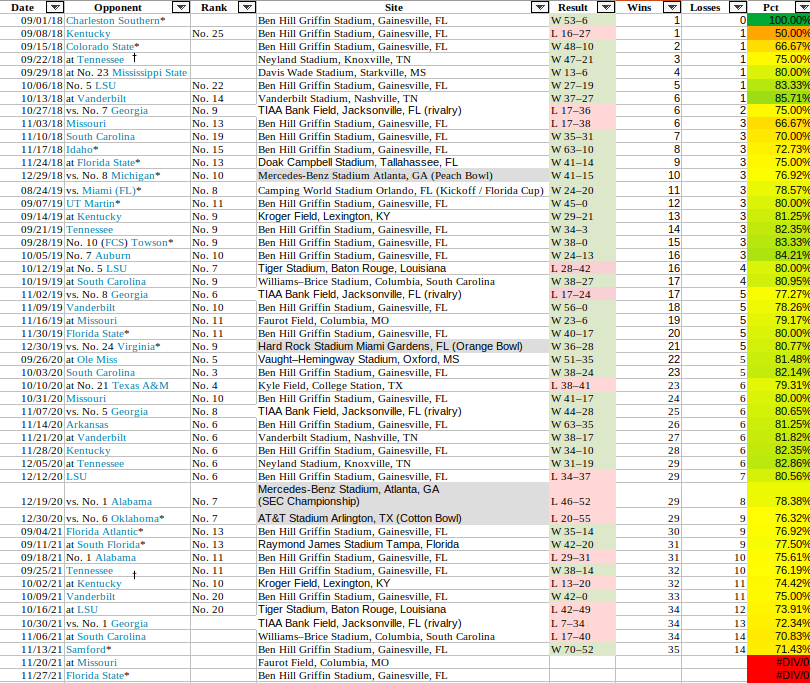 Staff member
Super Moderator
I cannot stress this too much:
CLEARLY, turning now to our immediate needs at the recently-opened coaching vacancies, AND/OR ANY discussion of “future moves at HEAD Coach”, RECRUITING MUST BE THE MAIN FOCUS AND CONSIDERATION NOW, obviously.
Whatever is possible beyond that, realistically speaking, whatever hopes anyone has for any kind of “eventual return” of anything ELSE in the way of excitement and all the rest out there ON THE FIELD in Gainesville for “The Fightin’ Gators” has to begin out on the recruiting trail.
Period.
Fix that—and suddenly “the sun comes out”!
Hey—If Mullen can somehow bring the right guy or guys in to concentrate on (and quickly begin) GETTING real results, much of this seeming “freefall into chaos” can be slowed, even dramatically REVERSED:
I could see us, under certain circumstances, singing a whole different tune a season or so from now! But THAT is the ONLY way I can see it.
Who, how and WHEN are the fundamental questions.
If all that were more a matter of reason and science, rather than seemingly some elusively arcane ART, maybe we’d have a better handle on where to start.
But as things are, well, time to chant and throw some BONES, I guess.

Moderator
From a head coach perspective I think that Mullen is being careful with recruits where his former boss, Urban Meyer, was not. What I mean is that Urban Meyer was obsessed with star rankings, and that led to a decline in locker room cohesion--especially when his primary assistants, Dan Mullen and Charlie Strong, left in 2008 and 2009. Yes, recruiting will fix many issues, but until these little shits with 5 stars next to their names stop acting like thugs in the off-season we should be careful becoming enamored by top-5 recruiting classes. True, under Mullen we have not recruited many 5-star recruits. At the same time, we have only had to kick 2 thugs off the team--and those were both very early. So, what about Alabama and Georgia and their ability to recruit high-4-star and 5-star athletes? Not so fast. In Tuscaloosa and Athens the media helps hide those arrests. In Gainesville, the Alligator, Alligator Army, Swamp247, and Orlando Sentinel will work together to throw Gator coaches and athletes under the bus.

Staff member
Super Moderator
@Escambia94,
I reread your above posting, gave it some additional consideration, and felt some further added stress and comment was warranted here.
It has overnight been reported by some who have close communication with UF insiders and their current, up-to-the-moment thinking that it has now been squarely faced and decided: Dan Mullen will NOT be fired mid-season.
That isn’t exactly some “ringing endorsement”, obviously, by ANY means. In fact, in some ways it is just the opposite. Until now, there was at least one large “school of thought” that his job overall was more secure than THAT:
This “announcement” makes it sound like both his position and its time frame is more tenuous than many thought. Indeed, there remains every chance he will not be able to upgrade that “job overall” judgment enough to likely retain it after all.
SO...On to my (yesterday’s) “previous entry” here, responding to your OWN “previous entry” here, directly above:

“Wow. I like and share your forthright and honest approach, and HAVE noted the general seeming improvement in the CHARACTER of our recruits under Mullen (the ones who stay, at any rate).
I suppose I have NOT been cognizant of such a fundamental difference in how our local MEDIA differ from those in Athens or Tuscaloosa—though I sure as heck at least suspected similar when it came to how our respective police forces (and local officialdom, etc) handled such matters.
It’s been hard to miss!
Your detailed post above tears away THAT “filter”—if only for the few of us looking for “truth and clarity” in the FIRST place.
It isn’t going to change, though, and the FACT remains that we will somehow have to find ways to raise the overall quality of the incoming recruiting classes now and in seasons ahead; otherwise there is little chance of our returning to Championship caliber play in those “seasons ahead”—no matter WHO our Coaches are, or how well they perform their jobs.
I don’t KNOW what else to say, how else to put it.
Somehow, we must find a way to negotiate the required “high wire act”! Either someone can manage it as the Head Coach at the University of Florida, or
IT WILL JUST NOT HAPPEN AGAIN.”
ll
ll
V
As a personal aside, so far I have little “impression” of an “apt fit” among the extensive, well-reasoned and well-researched apparent choices on your list.
I don’t get the impression YOU do either, E—. Am I wrong, for now?
I put great store in your well-considered insights.