Staff member
Super Moderator
If Emory could throw...
That’s FOUR open-as-you-EVER-get-‘em TD BOMBS missed by him.
The other guy gets HIS chance and makes it, though.
I don’t think I can make it to the end of the 3rd after all.

Moderator
Yep. I have checked out.

Staff member
Super Moderator
I don’t EVER wanna see Emory Jones under center for the Gators ever again.

Staff member
Super Moderator
Goodnight, my friends.
I will “be around” here and there, now and then during the coming “interim” during which we will (hopefully) be rebuilding this Gator program in its ENTIRETY under Coach BN, though. 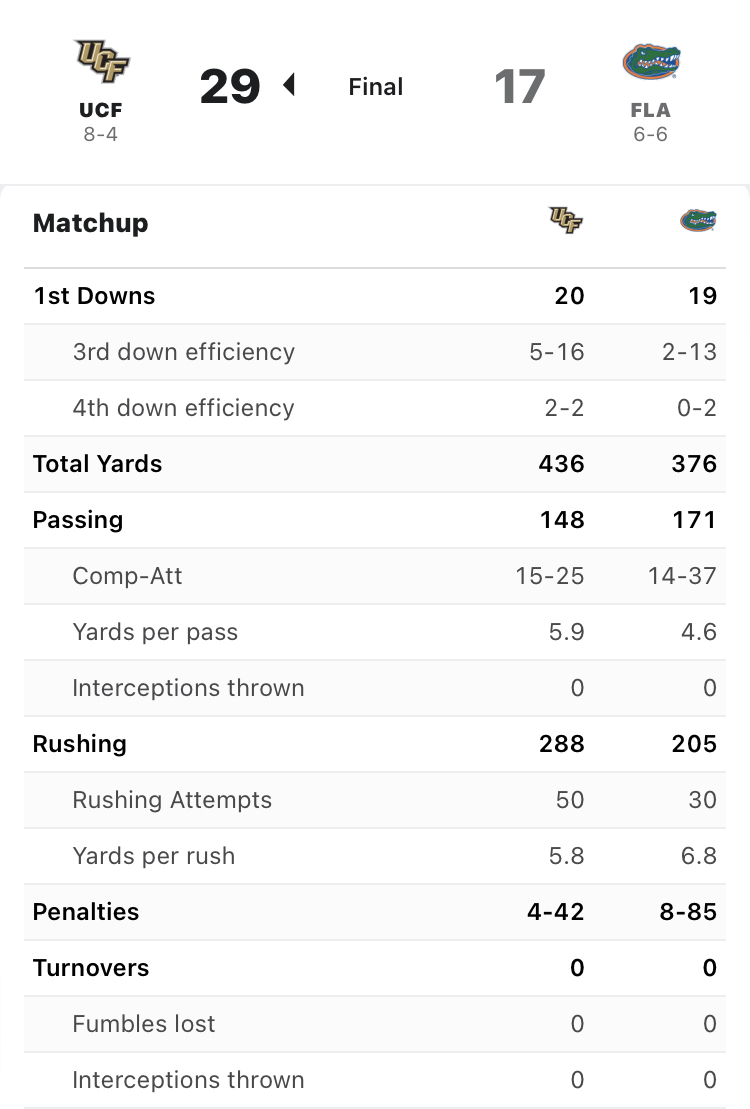 Staff member
Super Moderator
Just popping back in (not even monitoring the score anymore regarding this game) to note something in passing:
Is it not strange how, once “the spell” is lifted and the “Coach in question” is actually gone, we fans are now so much more able to recognize the “signs of weakness and decay” we somehow missed before?
I would place Emory Jones spotlighted front-and-center as “GUILTY” in this regard:
The young man isn’t just a complete misfire as an SEC-level passer, but as an example of Mullen’s judgement in choosing him, staying with him over all comers and continuing to try and GROOM him as such til the very END: I offer him (Jones) at THIS point as “Exhibit A” in MULLEN’S failure at UF. It should never have COME to this!

I am glad I didn't make it to this one yall. This was ugly.
L

DRU2012 said:
I don’t EVER wanna see Emory Jones under center for the Gators ever again.
Click to expand...

Me either, heck with that performance he would be lucky to be a quarterback for any other FBS program. Santa Claus is a lot more accurate than that.
L

Yes. He, like a number of the players who are staying (especially on defense, btw—interestingly enough) gave their all while the game was still in the balance.
Most of those leaving did themselves little in the way of “improving their appeal”, you notice?
While there are plenty of opportunities for “learning” there, the new staff could be forgiven for at least considering throwing the tapes AWAY!
Or maybe that’s just ME...

Dale J. Rodriguez said:
I am glad I didn't make it to this one yall. This was ugly.
Click to expand...

You know, Dale, I thought of you and ALMOST SAID as much here later in the 3rd quarter, when we finally began to cave...but I figured you were already in enough “pain” like rest of us by then without raising THAT “bag of mixed feelings”.
But at least you can grab onto that one slim (if somewhat dubious) “silver lining”, bra’.

Staff member
Super Moderator
I was gone, no longer watching by the end when they had that supposed “brawl”. Someone had to call me just to ask, “You seeing this?!!”.
Generally I feel like that sort of anger is better channeled into determined PLAY—obviously a general discipline/behavioral/self-control problem, right?
In truth, that one’s an ongoing “thing” with this Mullen-built&led team—sort of like all the dumb-ass penalties and things like throwing SHOES, fer cryin’ out loud! Too often, your own guys end up getting hurt.
I mean, you could sort of see it coming—and after all, these are the same guys who danced and sang in the locker room after surrendering all those points and barely beating SAMFORD, remember??? (And now that I look back, led by a guy who ran around the field trying to stir up the same kind of deal after that Mizzou game last season—then showed up at the post-game presser in that cheap-ass Darth Vader get-up, trying for SOME kind of “statement”!
ENOUGH!
There are things to be PROUD of—like singing “Won’t Back Down” along with “We Are the Boys” between the 3rd and 4th quarters—and then there are things that are discouraged from the moment one begins to play in organized sports!
“Fighting hard for the win” is encouraged, admired—outright “fighting to even some perceived grudge” is stupid—and usually backfires in ANY event!
You must log in or register to reply here.
Share:
Facebook Twitter Reddit Pinterest Tumblr WhatsApp Email Share Link